What Employers Need to Know About Marijuana Legalization 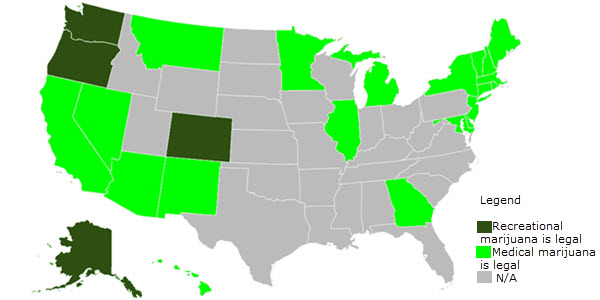 What Employers Need to Know About Marijuana Legalization: How Does it Effect Workplace Drug Policies?

While still prohibited on a federal level, recreational marijuana use is no longer illegal in Washington and Colorado, and many other states are keeping a sharp eye on what happens there as they examine legislation of their own. The change seems inevitable, but how will it affect you, the employer? Will you still be able to institute and accurately enforce workplace drug policy if marijuana is made legal in your state? Understanding how legalization can affect health, driving, and workplace issues is difficult without first understanding the affects that marijuana has on the body itself.

According to the National Highway Traffic Safety Administration (NHTSA), marijuana defies classification due to its wide spectrum of behavioral effects and the variety of unique responses from individual to individual. The main chemical compound responsible for these effects is tetrahydrocannabinol, or THC, and “effects include relaxation, euphoria, relaxed inhibitions, sense of well-being, disorientation, altered time and space perception, lack of concentration, impaired learning and memory, alterations in thought formation and expression, drowsiness, sedation, mood changes such as panic reactions and paranoia, and a more vivid sense of taste, sight, smell, and hearing. Stronger doses intensify reactions and may cause fluctuating emotions, flights of fragmentary thoughts with disturbed associations, a dulling of attention despite an illusion of heightened insight, image distortion, and psychosis [1].” If smoking marijuana, these effects peak within minutes of use, whereas the intensity is much lower and the peak time much longer if it is ingested.

Alcohol, a substance that has been put through the judicial ringer, serves as a good comparison as a chemical that is legal but very strongly regulated. According to the Virginia Alcoholic Beverage Control, alcohol affects the senses directly; depressing the nervous system and affecting cell-to-cell communication, which blurs vision, numbs the extremities, and dulls hearing [2]. Marijuana, on the other hand, while still reducing peripheral vision and balance, has less of an effect on the senses themselves, instead disrupting the prefrontal cortex, an area of the brain whose executive function (making choices about various courses of action) is part of what makes humans so different from other animals. That altered perception of time and space translates to not accurately gauging how fast the car in front of you is going, and since, unlike alcohol drinkers, marijuana users are aware of their impairment, they tend to overcompensate for it and feel more in control than they really are, even while their ability to multitask is greatly diminished and their ability to hold the car between the lines is reduced.

Studies have shown that an individual dosed with cannabis can often perform a task just as well as he or she would if sober, but brain imaging of dosed individuals shows that it requires much more brainpower to complete that task. This means that one dose isn’t going to have your forklift operator swerving all over the warehouse floor, but the increased energy required to maintain control means their ability to multitask is greatly diminished, and thus they are more at risk of making a mistake as more and more stimuli is introduced, such as a using a cellphone or radio. In the workplace this can create dangerous situations while operating equipment, or even simple inconveniences like pulling the wrong product off of the shelf.
There is a clearly defined threshold in Blood Alcohol Content (BAC) that marks the difference between a safe driver/worker and an impaired one. This is the true heart of the legalization issue. We know that marijuana, just like other substances, can be dangerous if consumed in the wrong dose or at the wrong time, but we are also trying to learn to measure that risk, set a baseline THC concentration level to accurately and fairly gauge impairment, and thus regulate marijuana as well as we do any other drug.

This task, however, is not an easy one. While much research regarding marijuana has occurred in Europe, we here in the ‘States don’t have many studies of our own, and from an enforcement perspective, determining whether someone is too stoned to be safe is difficult because of the high amount of variables involved in making that case. Currently, Colorado’s legal limit for THC concentration in the blood stream is 5 nanograms per milliliter. The reasons for this are twofold. Firstly, in most users, the concentration of THC in the bloodstream drops below five ng/mL three hours after use, a period of time that’s relevant due to the fact that a typical high lasts two hours. Also, an Australian study found that where any concentration of THC made a user twice as likely to be in a traffic accident, any concentration above five ng made the user at least 6.6 times more likely. To put this in perspective, you are six times more likely to be involved in an accident when using your cell phone while driving, and according to the National Safety Council, cell phone use is responsible for 26% of all auto accidents [3].

“Urine tests can be used to test for concentration, but the process takes five to seven days, and blood tests are always more accurate,” says Lisa Lee, owner of The Genesis Shop, a business that specializes in the administration and sales of on-site drug tests in Louisville, KY. Privacy violation aside, you can’t keep your employee on probation or jail a driver for a week while you wait for urine test results, and the amount of blood required by current tests is seven mL, which is much more than a finger prick produces. This leaves the breathalyzer, which can’t be relied on because THC doesn’t get expelled via exhalation like alcohol does. Lee says that tech moves quickly, and a Swedish breathalyzer device called a Sensadue is being tested, but there’s nothing currently on the market that can give an accurate, immediate result.

What effect will legalization have on the quality and safety of work? First, employers have remained in control of their drug policy even in states where both recreational and medical marijuana have been made legal. If you oversee a workplace that uses heavy machinery or dangerous equipment, it is still completely in your power to institute a zero tolerance policy, and the judicial system has sided with employers even in cases where the employee was using marijuana for medical purposes. Current testing methods such as urine tests and cheek swabs are sufficient to determine whether an employee is in violation of workplace drug policy.

Statistically, courts have sided with employers who have terminated marijuana users that violate workplace policy, and have reversed rulings in which an employer was order to pay for “self-procured medical marijuana”. Marijuana also lacks FDA approval as far as treating any medical condition or disease, as well as inclusion in any state medical treatment guidelines, so workers comp and insurance claims that seek reimbursement for medical marijuana are never approved [4]. As court cases like these often set the precedent for future rulings, it seems that even if recreational marijuana use becomes legal across the nation, its classification as a Schedule 1 drug wouldn’t change, and thus employers are very unlikely to end up having to foot the bill for its use even in cases where it was used purely for medicinal purposes. Where the law may change regarding its use, the legal attitude towards and classification of marijuana doesn’t look like it will follow suit.
Continue reading...